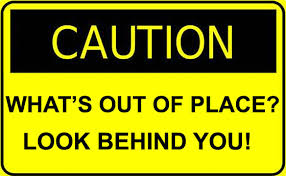 When we are walking around on the job, particularly when handling material, we are subject to many dangers.

Think about the following scenarios and see if you have ever been in a similar position:

Two errors in judgment caught up with the victim. Firstly, he ASSUMED that the tail gate had been returned to a safe position. Despite the fact that he was moving a heavy, bulky item, he did not check to make sure of his safe positioning. Secondly, he was working in an unwise manner. He moved backwards with a heavy object. There is always the danger that the load may get out of control and cause an injury.

A load should always be in front so you can see where you are going, and so you will be in the clear if the load gets away from you.

The employee was not watching where he was going. Making matters worse was an unsafe condition of an object protruding into an aisle-way.

When you are on foot, it is always dangerous to move backwards, particularly when handling materials. It is quicker and safer to move in a forward direction. Avoid moving backwards whenever you can. If you must move in a backward direction, check your path before you move and as often as possible while moving.

BE SAFE OUT THERE